A “cool solution” to a “hot issue” 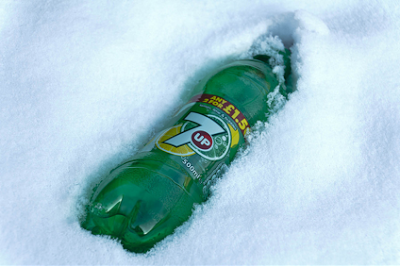 Tea and coffee seem to be fine to drink hot or cold, but when I ask you to think about drinking a soft drink, you’ll probably think of a refrigerated drink with cold sweat beads running down the sides of a can or bottle. When taking your first sip, the icy cold fizzy liquid startles your taste buds and tickles your throat.

But have you ever drunk a warm or even hot soft drink? Just the thought makes me want to opt for water instead.

A few weeks ago, Ian Alwill, the former Executive Director of Group Marketing and Communications at Nestle Oceania presented a case study in class for the Contemporary Consumer Insights unit of the Master of Marketing program.

Much earlier in his career he was the Asia Pacific Region Marketing Director for The Seven–Up Company.

The Taiwanese franchisee of the business was complaining that the formulation of the well-known soft drink 7-Up was too sweet. They felt that this was dramatically affecting sales of the product in the country. They were understandably a little hot under the collar … and said so!!

When he was presented with this dilemma by the franchised bottler he was quite surprised. Neighbouring Asian countries were happily drinking the exact formulation with no similar complaints. The global policy was not to change the formulation of such a well-known product until the market situation was well understood. His instincts and “gut feel” was that formulation was not the problem.

A market visit to the Taiwanese market place for 7-Up showed that the majority of the 7-Up sold in the country was in market stalls or in small stores… but most of these did not provide a sufficiently iced or refrigerated product, the way it was in other regional markets. His basic knowledge of the product was that temperature affects the sweetness of a product. The higher the temperature, the sweeter the product; and conversely, the lower the temperature, the less sweet the product tastes. Who would have known?

The product being sold in Taiwan did in fact taste sweeter because it was being consumed at a higher temperature since it was not adequately chilled. This explained why neighbouring Asian countries were not complaining of the same issue as they were selling the product for the most part refrigerated!

The real issue was now understood and the franchised bottler finally agreed that a different approach was needed.

A change in marketing support to the franchisee was in order. Rather than funding traditional brand advertising, the Seven–Up Company invested in 7-Up identified market coolers over a couple of seasons. As the product was then consumed chilled rather than warm/hot, there were no more complaints of the product being too sweet.

Ian then went on to stress to the class of Master students, the importance of understanding the culture, the consumer, and the market environment in which the sale occurs... to not assume that the standard mix of marketing activity is always the solution to marketing problems. In this case it was capital expenditure not marketing expense!!

He recommended a simple and important principle when formal market research is not available and your instincts say something is not right!

Sounds simple, but it’s paramount, especially when working in a culture that you did not grow up in.

Mina D’Souza
Alumni of the Master of Marketing program at the University of Sydney Business School
Posted by Sydney_Business at 11:30