Let me just start with the image below - it says quite a lot: 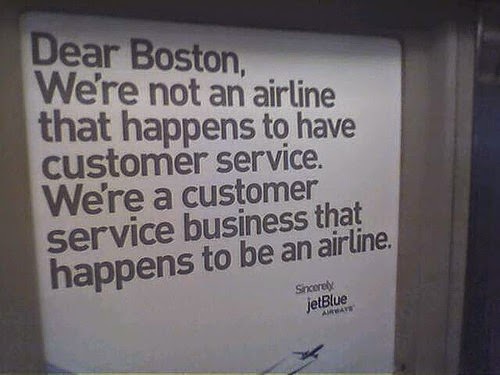 Not only does this quick message make you stop dead in your tracks, it actually makes you giggle a bit and feel like someone cares about you for the first time in aviation history! It’s so short and sweet, quirky, and different, that you really feel like your needs are being understood, especially while traveling. And personally, I’ve never flow on a better airline.

For example, one of their company mottos is “No first-class seats. No second-class citizens.” This statement really resonates with me, and probably most other travellers, at least within the U.S. (where the company operates), because you’re not just cattle being shoved around based on the grade of your meat. And traveling isn’t about what you can afford and what you can’t. It should be a pleasurable experience for everyone because after all, it’s a privilege. 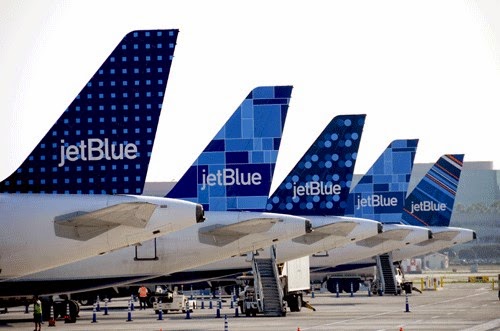 Above is an example of just one of the many ways JetBlue differentiates itself from the competition. Not only have they established a precise and unique repertoire and language with customers, they also have a new look. Each one of their aircraft fleet members is painted differently, and individually named - each containing the word “Blue” somewhere in the name. Realistically, it becomes a game! You can keep track of the planes you’ve been on, because they really become your friend instead of a mere bus in the air. I got to name a plane once - it’s called “BLUE-t-ful” in case you’re ever visiting.

At this point you’re probably thinking something like, “Well, the company is friendly; they can sit with me. And the planes are pretty cool, I think I’ve been on this one before. But, will they truly get me wherever I need to go?” And the answer is, yes! Being a low fare carrier, they have been exceptionally precise in their market research by targeting small airports with big business and vacation potential. Take my home airport, Westchester County (HPN), for example. In the shadow of three major airports contributing to one of the biggest travel hubs in the world, NYC, there are many people who can’t exactly make it to them due to traffic, weather, expensive prices, or flat out crowding! And, not only do the ads for flights at this airport, seen below, advertise their expanding destination market, but they talk about the comfort, and closeness. All contributing factors to exactly why the JetBlue experience is such a good one.

Not only do the three ads above display the type of consideration travellers look for, they also display the type of language travellers speak in. It is so concise - It just blows my mind. I drive by on the highway, and the billboard is easy to read and doesn’t distract me from driving. They are so well placed as well, only near the airports when you’re thinking about those last minute things to prepare for your trip - like lowering your expectations about your seat location because it’s probably going to be a tight squeeze, only to arrive on a JetBlue flight and find out you’re truly not just a herd of cattle again. Let alone how JetBlue also builds or refurbishes it’s own terminals at most airports they service to give back to the community there, bring in new business, and make it a better experience over all - as well put by the final ad displayed below:

So, not only have they mastered understanding travel needs, travel safety, and human behaviour, they’ve mastered communicating that understanding right back to the people. The Australian comparison would be JetStar, who has their own marketing tactics going on with flash sales and such and multiple international destinations - but JetBlue isn’t about creating flash customers because they’re in it for the loyalty and the long run.

Christine Drpich
Current student in the Master of Marketing program at the University of Sydney Business School
Posted by Sydney_Business at 11:00