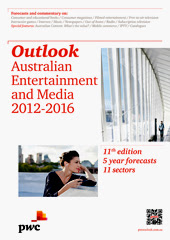 In an evening hosted by the Masters of Marketing Discipline at the University of Sydney, Megan Brownlow, Executive Director and Editor at PwC presented an interesting recently released report: Outlook: Australian Entertainment and Media 2012-2016 at the PwC head office in Sydney. Megan was one of three panelists to present at The Changing Media Marketplace night which attracted over 70 attendees from industry and academia.