Oreo, Audi and Tide clear winners at the Superbowl 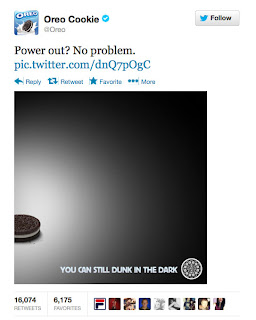 Superbowl XLVII has come and gone with the Ravens as the victors. There are however a few other notable winners this year that went home with thousands of tweets, a trophy of sorts for Advertising and Marketing departments, earned by dominating on-line social media creativeness and speed.

With a half hour blackout during the football game resulting in extra unforeseen advertising opportunities, only a handful of brands jumped on the Tweeting ‘brand’-wagon. Among the more successful were Oreo, Audi, and Tide. While the Ravens and 49ers were pacing the field during the blackout trying to prevent their muscles from cooling down, things were heating up within the advertising and marketing teams for these companies.

Oreo’s power outage tweet read: “Power out? No problem. YOU CAN STILL DUNK IN THE DARK”, with art work representing darkness with an Oreo in a dim spotlight. Oreo was able to capitalise on the advertising opportunity because their advertising firm and Management team were watching the game together and all powers needed to approve the ad were in the same room. 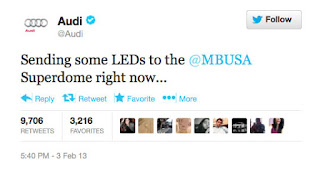 The Ravens and the 49ers weren’t the only competitors out in the field. Audi’s tweet had a message clearly aimed at their direct competitor Mercedes-Benz (@MBUSA) who holds the naming rights to the Superdome where the game was played. 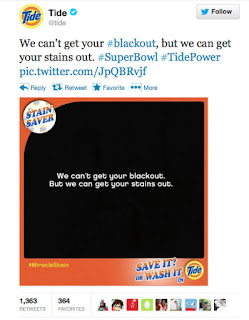 Tide a popular laundry detergent brand wasn’t going to wash away a great opportunity to build on their TV ad where millions had already been invested. Tide’s tweet focused their message on preserving dark clothing color while getting rid of stains.

And the list of other brands that participated in Tweeting ads during the power outage goes on. The lesson learnt is a valuable one. One that we focused on in the Integrated Marketing Communications unit of the Master of Marketing program: strike while the iron is hot, as timely innovation with a dash of humor can leave a lasting impression that’s hard to wash off.

Has your marketing team ever had to create an ad in less than 20 minutes?

Mina D’Souza
Current student in the Master of Marketing program at the University of Sydney Business School
Posted by Sydney_Business at 12:00