Pretty much everyone at some point has either heard of Vivid Sydney or come across the incredible displays scattered across the city. In case you have been living under a rock or live abroad and have no idea what Vivid Sydney is, it’s an annual 23-day festival of light, music and ideas. Unfortunately if you haven’t seen it yet, you’ve missed the boat because Vivid Sydney 2017 finished few days ago.

It’s a well-known event that attracts millions of tourists to the city. Last year alone, 2.3 million domestic residents and overseas tourists attended Vivid Sydney 2016, making it Australia’s largest festival event, and the largest event of its kind in the world. It features many of the world’s most important creative industry forums, a mesmerising free public exhibition of outdoor lighting sculptures and installations and a cutting-edge contemporary music program.

Vivid Sydney is where art, technology and commerce intersect to offer opportunities for a huge number of artists, designers, and manufacturers who share updated information on their industries while looking for new opportunities and innovation.

Vivid Sydney is comprised of three programs, which demonstrate the cooperation across different functions. During the festival there are also competitions between professionals within their respective industries to display amazing visual images, live music and creative networking all in front of our eyes.

I wonder how many people know just how much creative process is involved in generating such a rich and diverse flow of ideas and creative discussion to support the development of Australia’s creative sector.

The University of Sydney is also a part of this momentous event, covering all these three programs. We have demonstrated our expertise across a number of fields for Vivid Ideas Exchange by sharing ideas and influencing decisions by supplying information from fashion and the arts to big data.

Graphic Design lights up our thoughts on creativity 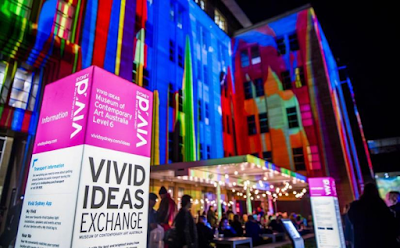 The show didn’t just leave a colorful visual impact to promote our wonderful city, it also lit up our thoughts on creativity.

Consider all the aspects that jump out at us when we see an eye-catching advertisement or promotional product. When you think about it, the graphic design on labels or product logos have the same eye cathcing effect as Vivid Sydney.

Graphic design is the art and practice of planning and projecting ideas and experiences with visual and textual content. It known as communication design. The form of the communication can be physical or virtual, and may include images, words, or graphic forms. Designers have arranged type, form, and image on posters, advertisements, packages, and other printed matter, as well as information visualizations, and graphics for newspapers and magazines. What’s more, motion graphics are equally predetermined and crafted, but are meant to be experienced over a fixed time span, such as for the opening credits of a movie or an online video meant to accompany a newspaper article.

As Marketing students, we might consider that graphic design is related to art, which is far from our major and what we supposed to be focusing on.

There are thousands of forecasts about the trend of graphic design each year. Graphic design, as a visual aid, serves as the conveyance of ideas and information in forms that can be read or looked upon. A definition which is intended to be very broad and inclusive. Expressed in terms of functions, or the tasks that graphics performs, the definition covers magical, illustrative, persuasive and informative graphics.

The visual communication of Vivid Sydney screams, ‘Sydney, you are beautiful!’ The makers of the event have figured out just how important it is to communicate this message to customers in the market with vivid visualization. Sydney is rapidly morphing into ‘Tomorrow’s Sydney’ and in case anyone missed that memo, Vivid succeeds at driving that message home.

Graphic Design, Art and Marketing tend to coincide with each other in the realm of decision making, encountering not only rational analysis, but also perceptual empathy. All are essential to influence potential customers imperceptibly, along with strengthening brand loyalty. So when it comes down to it, when it comes to marketing, in the end it’s often not what you say, but how you say it that is important.

Hazel Chen
Current student from the Master of Marketing program at the University of Sydney Business School.
Posted by Sydney_Business at 15:26