Are brands political players that can and should use their voice to contribute to ‘a better society’? Does it matter where they advertise, even if what they advertise has nothing to do with the boarder message of the medium? 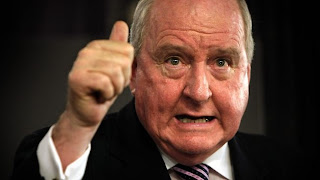 For two weeks 2GB management suspended all advertising on its morning show following presenter Alan Jones’ controversial public comment that the  prime minister’s father had “died of shame” over her “lies”. The comment came not long after a statement he made earlier this year that female politicians were “destroying the joint”.

The question facing advertisers today is should they return or not return to advertising on the show now that the ban on advertising has been lifted? Analysing the responses in the media today it is clear that there are two possible approaches to this wicked managerial dilemma: You do or you don’t depending on expected customer response; or you do or you don’t depending on your opinion about Alan Jones.

So what are the responses? Why do brand managers support – or withdraw support from – the controversial show? Respondents in the media have consistently based their argument on the economic view of the brand. They claim this is a business decision. Suzuki Australia’s general manager Tony Devers simply stated: "We're not taking sides, we just don't want to be involved in any controversy", "We have a very strong marketing program and we don't want that to be interrupted by issues that are irrelevant to our brand." The Metro Energy Group’s Tony Raya returned to advertising on the show and happily concluded that despite the fact that he received a lot of emails and phone calls of upset citizens – including one from someone who was so upset she was crying – advertising on the show worked for him. “I’ve got about 15 jobs out of it. He may be against it (green energy ed.) but it’s worked for me”. In a similar vein, A Current Affair claims that the "the strength of the 2GB audience gives us the ability to reach our target demographics".

I can only hope that the silent majority includes a great number of brands that do realise they have a responsibility that goes beyond serving the best interest of their own bottom line. What Mr Devers posits as irrelevant to his brand may not be irrelevant to society. I have always believed that social responsibility is not a role that can be delegated to a separate department in the organisation. It is the role of the brand management team to take responsibility for the kind of society their brand is co-creating. Not only for today, but also for tomorrow. And in my humble opinion, Australia would be a better place not giving airtime to people who disrespect women in leadership, including our Prime Minister herself.