Alexander Wang causes a stir with his free-for-all 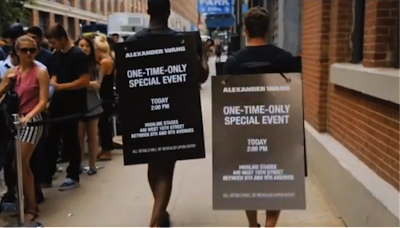 In fashion it’s all about exclusivity. So when you get invited to a “One-time-Only” Special event, you line up for five hours in the hot New York humidity, and you go! Especially if it’s held by Alexander Wang.

Last month, the darling of high fashion caused a stir when an undisclosed event turned out to be a free giveaway of hundreds of thousands of dollars worth of clothing. While first hand accounts told of the mayhem that followed, as devotees of fashion were welcomed by a video of Alexander himself explaining “Take as much as you physically can, because there are no shopping bags, no shopping carts” and that everything was free. Screams, catfights, destruction – thank goodness no one was trampled.

However… the saga continues! What was just a cool publicity stunt, maybe clearing out some static inventory, has now been released online for all to see.

Nothing, and I mean NOTHING can be a display of brand loyalty better than this video.

The designer said in a statement, “I love reaching out directly to our audience; to have a dialog that provokes and at the same time has a sense of wit and irony.” And maybe he’s got the formula to co-creation right? “ This project was viral and street at the same time, which allowed us not only to communicate with our audience through different avenues, but to activate them. I liked the idea of creating a destination that’s unknown, mysterious, and fun, where people can connect.”

Not only has Wang engaged with customers on a personal level – at least those who lived to tell the tale of the free-for-all – he’s also using this opportunity to engage on a different platform with customers around the world, YouTube. Although currently only 40 videos deep, the designer has been making more and more of these candid, odd, weird and funny videos. Although your mums and dads haven’t heard, it’s making a stir with the right crowd.

In our digital age, it’s easy just to tick the boxes of social media. Facebook, check. Twitter, check. But to engage, REALLY engage with a platform and create content that adds value for your customer is extremely difficult. I know I sound like one of those mad fans in the video, but Alexander, you’ve got my seal of approval.