“Ethical behaviour by corporations is justified only if it leads to greater profits.”

There is one topic I have been procrastinating for a while to write about - whether employing provocative content in marketing communications or campaigns is justified by sales, or is it just not worth it to compromise our legal and moral obligations. I wanted to put off having such a discussion, even when the latest Rolling Stone issue putting Dzhokhar Tsarnaev’s - “Boston bomber” photo on its cover. It got me really mad, but I am still not sure where I stand in this ethical dilemma. 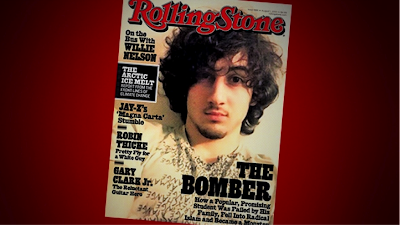 However, identifying and collecting such ethical marketing issues has now become a part of my coursework in our Regulatory Environment and Ethics class, there is no further excuse to postpone the discussion.

Yes, as marketers we are pretty clear that sometimes even backlash created by marketing activities seems much better in comparison with absolute lack of consumers’ interest. So, there is no surprise why in today’s highly connected world such marketing tactics has become even more acceptable. On Twitter for example, as one UK marketing agency reveals, controversial content is a main driver of a successful social media marketing campaign. In a bid to stand out, and thus to capture greater customer attention, many firms are progressively testing how far they can go with controversial or even offensive content.

While for some companies this strategy may bring valuable marketing outcomes, Rolling Stone recent case instead has showed how it also could be pulled in a Boycott Rolling Stone campaign. Once its controversial cover appeared on the Rolling Stone's website, it immediately became a wide spread buzz topic across all social media. Not surprisingly, that nearly all the comments were highly negative. Here is one comment written by a very tolerant respondent: “CONGRATULATIONS, ROLLING STONE. YOU SOLD YOUR SOUL FOR SALES” .

With this Rolling Stone case I am pretty clear where I am. However, according to AdWeek, Boycott Rolling Stone hasn’t affected the magazine’s sales in any way, I would like to argue that even from a marketing perspective not all publicity is a good publicity. Growing sales cannot be a simple justification for being offensive. For me, the main risk of breaking the moral line is not whether an offensive campaign gains or losses in sales, but whether I, as a marketer, act in an ethically reasonable fashion.

It is definitely an endless discussion when it comes to where to draw the line for provocative marketing campaigns. Is this statement: “Ethical behaviour by corporations is justified only if it leads to greater profits” true? Luckily, we get a great chance at gaining a broader view on that through our Regulatory Environment and Ethics class this semester in Master of Marketing program at The University of Sydney Business School.