Hungry Jacks is throwing down just as much heat as their new counter campaign claims - Get your free food at Hungry Jacks instead of at ‘You Know Who.’ How much more clever and ruthless can you get?

Hungry Jacks seems to be very, extremely, confident in the superiority of their food as opposed to their competitors who are giving out small concessions in their monopoly board game imitation. This is all in hopes of converting potential customers into loyal customers. These customers who are being targeted by Hungry Jacks have probably been burned by spending $10.00-$20.00 on their meals with a competitor to only get a small Sunday Ice Cream or small chips in return. Chances are, this is the perfect time to offer those same people more value and potentially better taste at Hungry Jacks. 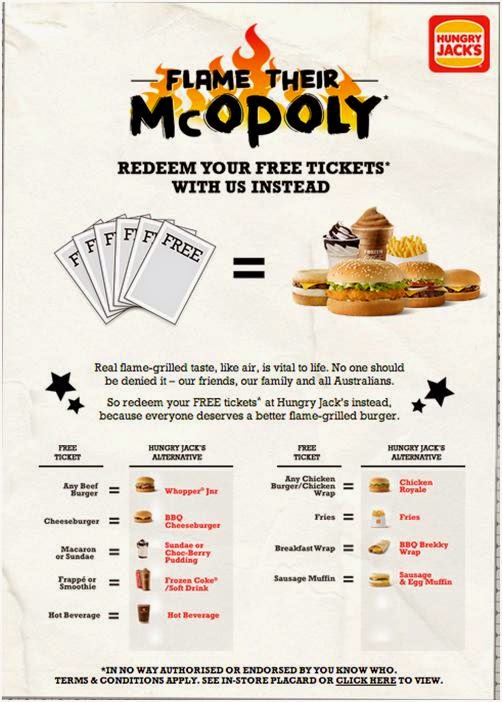 Many people have reportedly been concerned with the ethicality of this hijacking campaign. Other instances of hijacking have occurred around major international sporting events, such as the FIFA World Cup, where competitors like Addidas and Nike confused patrons over who’s actually sponsoring the event. This campaign however, can either work brilliantly or horribly backfire because fast food customers may get confused as to where they’re supposed to go for the taste they’re craving or the free item they want to claim.

Above is a preview of the website Hungry Jacks specifically set up to explain the T’s & C’s for the swap, but ultimately, providing additional choices of items which allow people to redeem their free food vouchers in more ways will make them feel more empowered and thus, potentially successfully hijack some of the competitor’s campaign.

Christine Drpich
Current student in the Master of Marketing program at the University of Sydney Business School
Posted by Sydney_Business at 12:30