Fifty Shades of …. From Hallmark holiday to the Hallmark of something slightly more naughty

Often ridiculed yet adored as the classic Hallmark holiday, Valentine's Day has long had a spotlight shone upon it as the commercial entity of “what true love stands for”.

However, with red helium balloons, tacky-themed restaurant menus and copious bouquets of roses having always led the way, 2015 has seen this marketing- induced essence of romance take a slight shift in direction…


And yes, before you ask, the above mystery Facebook-ee is completely aware their essence of “shock” has been used for the vital purposes of this Marketing blog-ism.

Having not actually gone to see this film, it would not be fair of me to place forward an educated statement regarding the irony of the highly awaited, yet somewhat scathed adaptation of “Fifty Shades of Grey”, that premiered globally on cupid’s own day. However, I feel it is safe to say that the kind of relationship portrayed in the film bares nothing in common with the kind of romance that Hallmark envisioned through its first form of Valentines Day’s cards in 1910.

Based on a book that sold 100 million copies worldwide, this trilogy, now turned global blockbuster, earned over $240 million alone during its premier last weekend. Consequently, regardless of critics' opinions and despite targeting what some might say is a very distinct niche, sales figures such as this have only made producers smirk with pleasure, and have also made “50 Shades” a mainstream phenomenon by default - and effectively a brand in its own right.

As per my own friend's shock on Facebook, the “Fifty Shades” brand recalls an essence of shock and intrigue. Clearly both the publishers and producers have very cleverly leveraged digital marketing to further gain an associated interest with the “Fifty Shades” brand. However, it is clear their position was to never blatantly warn, but rather to cause impact - resulting in a somewhat cult following that has stemmed from a word-of-mouth cultivation through social media.

It’s not a surprise that it was only a matter of time before the “Fifty Shades” concept spread, resulting in marketers being marketers and numerous companies aiming to draw associations and coattails from this saucy brand’s glory. Despite brand associations generally positioned as the extent to which a particular brand calls to mind the attributes of a general product category, it is clear the elements of intrigue, shock and associated raunchiness led to a whole variety of unexpected brands jumping on the Fifty Shades bandwagon.

On that note, here is a few of the most random, yet somewhat humorous ones I’ve come across so far:


Complete with tongue and cheek introductions, 50 SHADES OF KALE by Dr. Drew Ramsey and Jennifer Iserloh is described as a colorful, delicious and fun cookbook with 50 decadent recipes using every born hipster’s number one superfood.


Despite having provided a wide variety of cuddly bears for decades, this year the Vermont Teddy Bear Company took a somewhat saucy spin on the traditional Valentine’s Day gift. Introducing the “Fifty Shades of Grey Bear,” dressed in a business suit and other additional props.


The set includes six mini nail lacquers including tones such as “My Silk Tie” and “Dark Side of the Mood”. 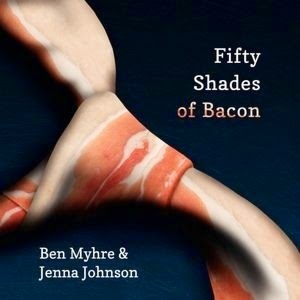 Who knew there was more than fifty different recipes for cooking bacon? Clearly targeting a consumer market with a unique foodie fetish.

Natasha Menon
Current student in the Master of Marketing program at the University of Sydney Business School
Posted by Sydney_Business at 11:33