Embrace the Changes, Our Nation of Nations - 2016 Australian Census

In case you missed it while you were buried under your uni assessments, data from the 2016 Australian Census has officially come out and the results are quite surprising. One thing is clear, however - Australia is changing. 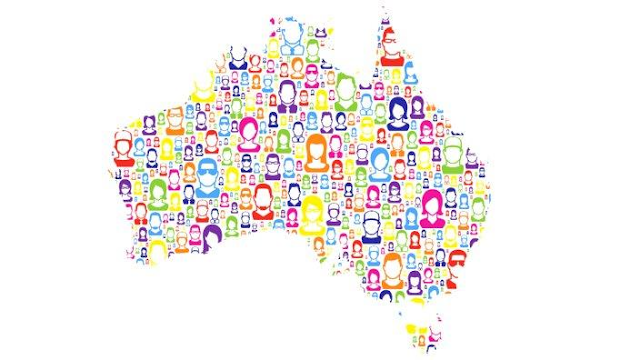 To start with (and there’s no surprise here), we are getting older, less religious and there are far more same-sex couples. Our nation has never been so multicultural, and all the latest facts leave hints about how Australia’s population has developed over recent years. Not only in terms of origin, age and gender, but also how where we are headed in the future. This demographic shift leads us to embrace the business opportunities with these evolving market trends.

Let’s take a look how gender is shaping up.

The Australian Bureau of Statistics discovered that the population now consists of 50.7% women and 49.3% men. Women are continuing to surmount men.

Coupled with the women’s empowerment trend and marketing becoming more inclusive and also more politicised, this implies that the “she-economy” is still in play - something that presents a huge opportunity for brands.

This semester, in Contemporary Consumer Behaviour, you might recall Linda McGregor, the founder of All About Eve, who explained how women have strong buyers’ power due to the fact that they are typically the family’s “director”. Women have both the power of deciding on or strongly influencing more than 80% of purchases. What’s more, they are expected to make up 50% of main income earners by 2019.

The number of families have risen by roughly one million to just over six million. The typical family is still a standard couple with children, but this number decreased to 45% in 2016 from 54% in 1991. It probably doesn’t shock you that nowadays people are less willing to have kids, with numbers slightly increasing from about a third to 38%.

According to the Daily Telegraph, there are more same-sex couples, with a jump of 39% or 47,000 in the past five years. This change in the structure of the household unit will influence household purchases and consumer behaviour. For marketers, this is an important trend for businesses in the children’s category to look into. This, along with developing a better understanding of the sub-culture in Australia’s LGBT market, will enable us to provide more value and better products and services.

Age is just a number.

People are getting older. It’s a fact we can’t ignore. In Australia, the median age grew to 38 years in 2016; rising from the median of 37 years that’s been recorded since the 2006 Census. Although some might argue that this is correlated with the healthcare industry boom; others would say that more and more baby boomers are just getting older.

While our mum and dad’s grey hairs don’t qualify them for their pensions just yet, the grandparents will be relieved to have some more bingo buddies. The proportion of the population aged 65 years and over rose to 16% in 2016 from 14% in 2011.

I said ‘Do you speak my language?’, but he just smiled and gave me a Vegemite sandwich.

It is revealed in the 2016 Australian Census that over 300 languages are spoken across the country! Here are the top five languages below. 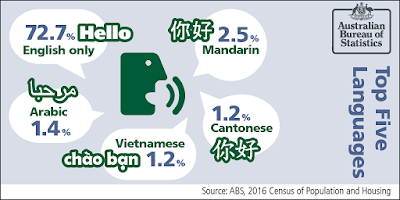 Australia is more and more multicultural, with 26% of the population born overseas. These are the top five countries of birth as seen on Business Insider. 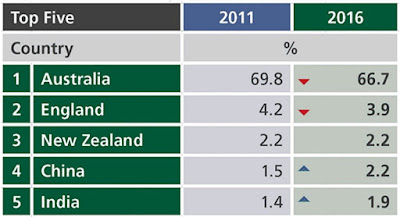 The numbers don’t lie. Australia’s rich, multicultural population makes it an international country with countless different sub-cultures. Companies should remember these essential facts when conducting consumer research to aid with deciding language choice in ads. The message must be clear if you want to target customers who speak languages other than English.

When considering Maslow’s Hierarchy of Needs, such income growth might benefit industries which provide products and services that suit consumers’ higher level of needs such as entertainment, dining out and retail therapy. 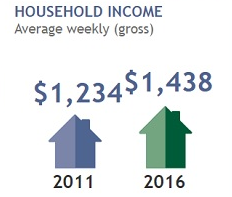 Sydney, the largest city in Australia, is fast approaching five million residents. The population has been rising rapidly - increasing by 1,656 people every week since the previous Census. Melbourne is catching up - growing by an average of 1,859 a week according to the Business Insider.

With so many new residents all clamouring to live close to the city centre, people are living in apartments instead of houses. 7 News Sydney reported that urbanisation trends have been key drivers for infrastructure growth in the city.

Census Australia has shone a light on Australia’s changing consumer landscape. The evolving demographic is a key driver for growth across all industries, presenting numerous business opportunities for those who can reach their audiences.

But with so much noise and confusion, how you use this information will determine whether or not your brand will stand out from the crowd.

Watch the Official Australia Census 2016 video to find out more!


Join our Master of Marketing and study on a beautiful campus in one of the world's best cities!
Sydney ranks second on a list of the 50 best cities in the world. It’s one of the best places to live, work and study, scoring above even New York and Paris! The University of Sydney has also been named among the world’s top 10 most beautiful campuses.

The University of Sydney’s Master of Marketing program was developed by the Business School, with extensive advice from reputable business leaders to ensure that the course meets the real needs of contemporary business, making it one of the most cutting-edge, industry-relevant marketing degrees in Australia.


Bowie Chen
Current student from the Master of Marketing program at the University of Sydney Business School.
Bowie has several years' experience working in FMCG marketing, media and consulting.
Posted by Sydney_Business at 17:01