Australia’s retail sector is in trouble. The $300 billion, over-crowded and highly competitive industry’s marketing strategies are getting more creative in order to secure top-of-mind awareness. It’s no wonder that retailers like Myer are partnering with superstar influencers to lift sales in the midst of a stale trading environment.

Fans set to Witness a change.

Perry, who released her fourth major label album, Witness, on June 9, stands as one of the biggest successes in the music industry. She has had huge international success, selling over 6.5 million albulms, had 14 Billboard hits, and even performed at the Super Bowl.

But the singer isn’t the same sugar-coated pop-start that she used to be. As a widely publicised supporter of Hillary Clinton in the US elections, Katy Perry has changed her stance in an effort to stand against misogyny. Not only her hair and music have changed, but also her message.

She has been accused of lipsyncing, being racist, homophobic and even mean (who can forget her all out feud with Taylor Swift). But that still hasn’t stopped the celebrity from garnering over 100m twitter followers, whether they be real or only bots. 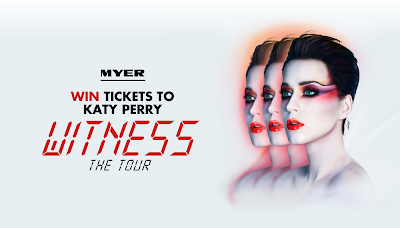 Some would say that Myer chief executive Richard Umbers move to become the naming rights partner of popstar Katy Perry’s Witness tour is nothing short of bold. But for many years now, Katy Perry’s global reach makes her a key influencer.The singer has strategically secured numerous corporate sponsorships and ­celebrity endorsements with her ‘universal appeal’. Something which resonates particularly with Myer’s target audience.

In an interiew with Mumbrella, Michael Scott, Myer’s executive general manager of brand, marketing and loyalty, explained that the goal of the partnership is to boost the retailer’s bespoke and “special” offering to its customers.


“We are always on the look-out to partner strategically with brands which appeal and connect with our consumers,” Scott said.

The buzzword in marketing these days is experiential marketing. Perhaps that’s why Myer has heavily invested in in-store experiences to highlight the value of customer engagement. Live marketing schemes encourage consumers to participate nd interact with a brand on a personal level.

Myer boss, Umbers, who previously declared that retail’s not for the timid, stated that, “It is really about how does a modern retailer compete and the view is we have to be in destination retail, we have to have something that has a real experience theme to it, and this seems a very natural extension to that.

“We had the opportunity to present the Witness tour and we thought that would be a fantastic extension of our thinking around the importance of experiential retail,” Mr Umbers said to The Australian.

If experiential retail is the word, then Myer is spreading it like the gospel. Not only have they partnered with Perry, they have also erected an ice-skating rink for Myer’s Wonderland at its Sydney city store and a Tesla showroom at their flagship store in Melbourne.

A partnership made in heaven?

In the Marketing Consulting Project we learned that when collaborating with stakeholders it is vital to consider all of the potential ethical issues that could arise from a partnership.

That’s why we really must question the wisdom of Myer partnering with the likes of Perry. Although highly influential, she has been known on many occasions top put her foot in it. Why should this time be any different?

Myer, who was initially thrilled to give their customers the chance to win free tickets to Perry’s Witness tour, was left embarassed when it came to an unfortunate comment by Perry. The campaign video with Myer, which is the sole naming rights partner of Perry’s Witness tour, offended viewers with Perry’s comment encouraging her pet dog Nugget to “chase some koalas”.

A spokesman for Myer said: “We are aware of comments in relation to Katy Perry’s Witness: The Tour advertisement and a particular reference made to koalas. We are currently removing the material which references koalas.”

In an interview with the Courier Mail, Claire Madden, who has worked at Australia Zoo and Currumbin Wildlife Sanctuary, said that “This is just absolute ignorance from Perry and Myer, and inappropriate on so many levels” she said.

“Perry is a role model to so many young people, and this just destroys all the good work we do to try to encourage people not to let their dogs come into contact with koalas.”

Say what you will about her, Myer or their alliance. But one thing is for sure and that is that they are garnering attention in the press and on the world stage. It’s the first time that a department store has sponsored one of her concerts. If Myer’s falling market share increases with this gambit, then maybe it won’t be the last.

Alyce Brierley
Current student from the Master of Marketing program at the University of Sydney Business School.
Posted by Sydney_Business at 09:19