I’ve never been so proud to be an Aussie. After a hard slog of heated debates and intense rallying, finally the postal vote survey results have given LGBTI+ Australians the right to same-sex marriage with a majority vote of 61%. As a student in the Master of Marketing Program, my mind automatically wonders, ‘What’s next?’. How will same-sex marriage affect people’s perceptions of brands? What will be the effect on the economy? And will there be changes in the workplace environment? 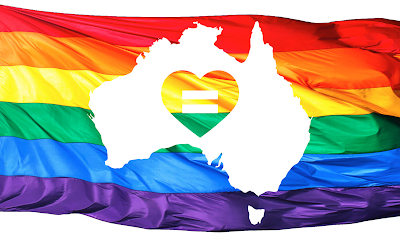 At the University of Sydney, students are encouraged to ‘unlearn’ old thought processes and open their minds to a world of openness, empathy and tolerance. Finally, Australia has decided to take a similar stance by choosing to ‘unlearn’ the previous notion of love. An incredible, 80 per cent of adult Australians participated in the voluntary postal vote that started hitting Australian letterboxes back in early September.

Now the future of LGBTI+ Australians is in the hands of the federal parliament and will require federal politicians to agree with the voice of the majority of Australians. So with the battle won and the fight still far from over, will the greater society choose to accept this change in culture? And will brands choose to change along with them? 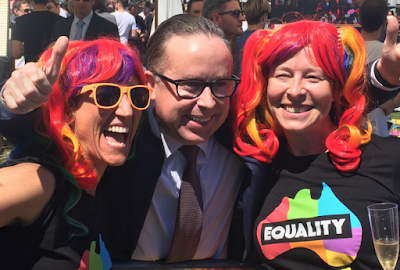 Supporting the cause is set to pay off.

During the campaigning, many brands who decided to publicly show their support can now rejoice because they aligned themselves with the winning cause. Prominent ‘YES’ supporter, Qantas CEO Alan Joyce, gave the keynote address at a results reveal party in Sydney’s Prince Alfred Park, asking Malcolm Turnbull to “get on and do it”. The Irish-born Joyce said, “I was so proud of Ireland when they were the first country to vote for marriage equality, but today I’m proud of Australia its an amazing outcome.”

Qantas has been a staunch supporter of marriage equality for some time, going all out by furnishing the exterior of a plane in rainbow regalia for Mardi Gras. Joyce even personally donated $1m to the ‘Yes’ campaign. 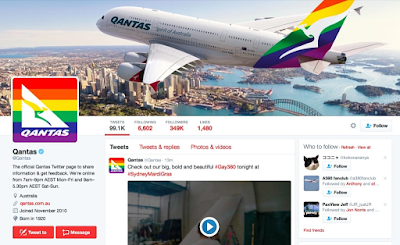 The benefits of the pink dollar.
There’s no doubt that marriage equality will do wonders to boost the bottom line for brands who supported ‘YES’. But what about the benefits to the Australian economy? The economic activity that will be created by gay weddings is sometimes called the pink dollar. From increased spending in the Australian economy, improved labour productivity to betterment in social and mental health, not to mention expenditure on weddings, the new legislation will bring a range of positive benefits.

The proof is in the pudding. Just look at the USA, where same-sex weddings resulted in a boost of $111 million over five years in the economy of the American state of Massachusetts alone. If only 50% of same-sex couples choose to tie the knot and then half of those couples get married within twelve months of the marriage equality legislation being passed, ANZ calculated that expenditure on weddings alone could add at least $500 million to the economy. Assuming that a wedding costs $51,000 on average, expenses include; venue hire, catering, waitstaff, alcohol, decorators, dress and suit shops, photographers, receptions, wedding planners and florists, just to name a few. 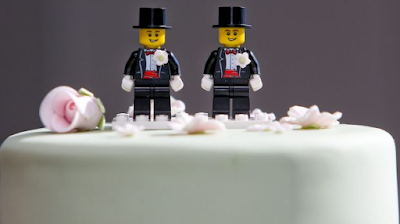 Image: A wedding cake with Lego men was part of an advertising campaign pitched at Australians wanting to get married in New Zealand.

In addition to the benefits for a wide range of industries, state governments will also receive a new source of revenue with more marriage licence fees and secular wedding ceremonies.

In fact, all the local businesses that have previously missed out on earning the pink dollar due to same-sex marriages being conducted overseas will now be able to share a piece of the pie. Commonly, Australians who are in a same-sex relationship often go abroad to tie the knot. Now we should see a drop in Australians travelling overseas for marriage purposes, giving way to a rise in reinvesting funds into industries at home.

Is this the end of irrational social discrimination in the workplace?

The knock-on effects of marriage equality could also benefit Australian businesses through increased productivity, higher talent attraction and decreased chance of consumer backlash. Marriage equality is a step towards overcoming irrational social discrimination against LGBTI+, which according to UBS economist, Paul Donovan, acts as an inhibitor to increased labour productivity and labour potential.

“At least part of the growth of income inequality in recent years has been about the higher rewards to higher skills — the market place more value on maximizing skills than in the past,” writes Donovan for Australian Business Insider. “This is why any form of prejudice is bad economics. Irrationally discriminating against a section of society will deny an economy the full value of that group’s skill set.”

“Legalizing same-sex marriage is a means of reducing prejudice and through so doing should help to raise productivity in an economy,” concludes Donovan.

According to Donovan, legalizing same-sex marriage helps to promote trend growth in the following three ways:
Considering that 1% of all couples are same-sex couples in Australia, the passing of this legislation is huge in comparison. There is no price that can be put on the economic benefits, decrease in discrimination, and overall improvement to the lives and well-being of same sex couples. I hope, with all my heart that with the results in, this bill can be passed quickly so that we can leave all the ugliness of the debating from the last few months behind, working together to build a better future for all Australians.

Alyce Brierley
Current student in the Master of Marketing program at the University of Sydney Business School
Posted by Sydney_Business at 09:11