The weekend’s Integrated Marketing Communication class was almost completely all about how critical it is for marketers to communicate with the single person who is our target audience. To what certain extent can marketing communication be personalised? Actually, it’s not really a new idea that I've never heard of before, but the challenge is how to define the exact individual behind the masses, and how to build engagement with him or her.

The recent Mini billboard has handled this perfectly. It was extremely personalised communication through digital displays showing individually tailored massages to each of the Mini’s drivers. The ad is activated by spotters with iPads, taking photos of Mini’s drivers in their cars, and their image was then shown on the billboard further down the road.

The personal digital message then turns into real interaction like free tanks of petrol, or a lovely breakfast with 2000 other Mini's drivers. It is definintely out of the ordinary to see, instead of a regular old billboard, and a personalised message saying "Early start, Mr. Grey Mini driver? … Need a pick me up? … Fancy a tasty bacon butty? … Mini's buying … See you at the next garage."


Mini's digital billboard performance was only one part of its global marketing campaign “not normal” run by Iris Worldwide. By launching this first brand campaign after almost six years, Mini wanted to celebrate the special relationship the company has with its customers. Using the insight that Mini customers see their car in very unique and creative way, ad agencies then created the campaign that gets Mini drivers to feel like a part of extraordinary “not normal” community. 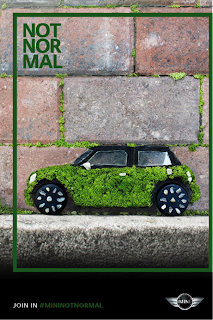 Whether Mini’s marketers desired to only satisfy their exciting customers, or to grab attention from potential Mini’s buyers with such a fun campaign, they have found a new approach to communicate with Mini’s audience on a totally personal level. I definitely like this “not normal” campaign itself and the way Mini has so successfully used consumers’ insight to delight Mini’s drivers.