Spice of life you say?


The concept of connection said to be the new “Spice of Life” for the new Masterfoods dinnertime campaign.

If I asked you, “if could have dinner with anyone, living or dead, who would it be?” I am sure most of you would say socialites and intellects such as George Clooney, Einstein, John Lennon, Hemmingway and so forth. Well that is the exact question Mars Food is asking Australian families for a new Masterfoods campaign created to prioritise and celebrate dinner again, particularly after much of the research revealed the meal created important connections between families.

The new campaign named “Lets make dinnertime matter” has been created around findings that imply 78% of Australians obtain a deeper connection from sharing a meal with loved ones than they would usually do through any other activity. Putting the findings aside, almost 75% of the people surveyed said they would change something about their dinners. So the question stands to be rather conflicting if you ask me?

The process of creating the video that accompanied the campaign involved Mars Food touring the nation, filming at a diverse range of venue’s and community locations. In the way in which the video was constructed, the ads further feature real Australian families connecting over dinner.

Ensuring its hits a wider plethora of social channels, the campaign is implementing social media outlets including Twitter and Facebook by further encouraging conversation around the hashtag #makedinnertimematter. 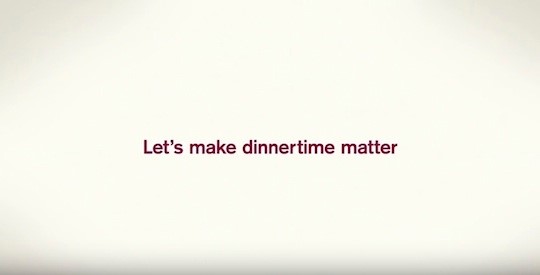 A report commissioned by Mars Food Australia called “Lifting the Lid on Dinnertime” supported the recent campaign and further went on to research how food shared with company contributed towards our emotional well-being. As stated in a recent article the results suggested that “when it comes to dinnertime in Australia, more people put greater emphasis as to what is going on around the table, rather than what is actually on the plate”. Since its launch on February 15th, the video has been viewed over 8.5 million times. Now that’s what you call viral!

Lauren Musat
Current student in the Master of Marketing program at the University of Sydney Business School﻿
Posted by Sydney_Business at 15:00